Dan Hicks shared a graph breaking down MPs’ Brexit/Remain voting in terms of the subjects they studied at university, taken from this LSE blog post. Here it is: 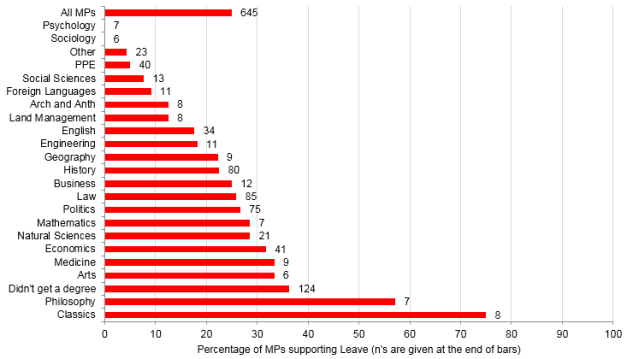 MPs with a first degree in geography turn out to be more or less as remain-y as the sample of MPs as a whole (and more remain-y than MPs with degrees in law, politics, natural science, economics etc.)

Dan was interested in the Arch and Anth MPs; I wondered who the geographers were. There were nine when the referendum took place, and after a good deal of research by Alison Stenning, Stephen Taylor, Oliver Duke-Williams, NUGEOG, Ruth Craggs, Mary Gilmartin, Jon Swords (thanks all) we have identified eight MPs.

Labour MP Laura Pidcock, (NW Durham) has an MSc in Disaster Management and Sustainable Development from Northumbria University. However she has a first degree in politics from MMU and only became an MP in 2017, and doesn’t count either way.

So we’ve established eight of the nine MPs who were geographers in 2016. One lost their seat and one gave theirs up since then; I’m not sure if any new geographer MPs have been elected since.

What does it all mean? No idea. But now you know.